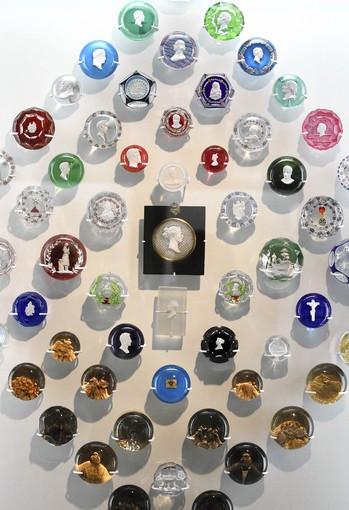 We would like to thank everyone who responded to the Chicago Tribune’s article postulating that the Chicago Art Institute’s Rubloff paperweight exhibit is not a good use of the world famous museum’s space.  We at L.H. Selman obviously took issue with the article and asked those of you in the paperweight community from around the world to respond with your calls and letters.

Well, call and write you did!

The Tribune printed a follow-up story headlined, “Worst exhibits of 2011?  Some beg to differ”. The reporter went on to state;

“…I have heard by now from nearly 300 people, including a good portion of the world’s collectors of glass paperweights, incensed that I thought the “Arthur Rubloff Paperweight Collection” gets too much space in the Art Institute.”

Many of you copied us with your letters.  We were touched by stories of you as a young children seeing paperweights for the very first time when visiting the Rubloff with a special family member, or saving up the money so you could one day see it in person and how it made you feel to finally experience the Rubloff collection, the Art Institute and Chicago.  Some of you challenged the reporter to take time to learn about the art form before passing judgement, and then there was one of our favorite letters that asked, “What do you collect?  Bobbleheads?”

Whether you revisited a favorite memory, tried to educate, expressed anger or resorted to humor, your letters are priceless and we would like to reprint them in a special L.H. Selman blog here on our website.

So, if you already sent us a copy of your letter (unless you ask us not to post it) we will add it to the new L.H. Selman blog next week.  If we don’t already have a copy of your letter, please email us a copy or send us something new describing a special paperweight memory or a description of what paperweights mean to you and we will add it to the postings.  And, as always, special credit for poems!

By the way, we have spoken with the Art Institute and they have assured us that the Rubloff paperweight collection is a treasured collection within the museum and that they have every intention of keeping it on display for many years to come.

Thank you from the bottom of our hearts.

77 thoughts on “What do you think of the Rubloff Collection?”