Within the history of glass work there is another distinction that we wish to elucidate here. All of the artists mentioned thus far, whether furnace workers or lampworkers, use fire. Their glass is hot, molten, and pliable. Their skill lies in working it. Traditionally, a piece made in the hot glass process is later embellished or decorated when cold by a cutter. Today, with modern equipment, the possibilities emerge for cold glassworkers to create their own pieces. For these glassworkers, skill lies in the conception of design and the precision of grinding and polishing.

Historically, cold work as we know it began in seventeenth-century Bohemia, perhaps because of the natural resources available in that region. Casper Lehmann, the foremost engraver and gem cutter in the court of Rudolf II, developed the technique of copper-wheel engraving. His students traveled to Germany, bringing with them techniques tor cutting rock crystal. Shortly afterwards, gem cutters started to cut glass. Cut and engraved glass appeared in the early seventeenth century in many forms. The art was widespread in Europe and continued to be a popular means of glass embellishment through the eighteenth century. The invention of flint glass in England gave craftsmen a harder glass, better able to take on a brilliant finish when cut and polished.

Within a glass factory, the position of the cutter has fluctuated widely. In Czechoslovakia and England, the cutter was usually considered the master of the shop, with the blower merely making the vessel. Yet, in other areas, the cutter has often been relegated to a secondary position, with his skills thought of as an embellishment, a trifling decoration.

The cold worker has the unique ability’ to maintain physical hand contact with the glass. He can make distinct edges and sharp angles. And he can insert into the piece other materials impossible to use in the sensitive hot glass process. With fewer restrictions, pieces of great precision, brilliance, and complexity can be created. W orking with cold glass thus opens a broad, new area for exploration in the art of the paperweight.

Artist Sylvia Fama works exclusively with cold glass techniques, producing a strikingly modern series of paperweights. Her particular style grew out of a long association with sculpting. In 1978 she began working with clay, but soon moved into glassblowing. While studying at the California College of Arts and Crafts she was introduced to sandblasting. Then she started experimenting with adhesives and sculpting. Using these techniques, she caned bowls and plates, but soon it became apparent that only the paperweight form with its thickness and solidity would allow her to can e as deeply as she wished.

Fama works out of two studios. Her design studio and gallery are in Oakland, California. Her “dirty” studio, as she calls it, where the blasting, welding, and the w ork w ith blowtorches take place, is in South San Francisco. Because she needs a variety of colors and a consistent size to produce her unusual weights, she uses blank paperweights that are especially produced tor her at the Cohn- Stone Studio.

All Fama weights are engraved “S Fama” and dated on the bottom. In 1984 artist Barry’ Sautner began creating diatreta and insculpture paperweights in conjunction with the Vandermark/Merritt Glass Studios. Since that time he has opened Sautner Cameo Studio in Lansdale, Pennsylvania.

Diatreta is an extremely difficult and unusual process accomplished entirely by sandblasting on cold glass. The term is derived from the Greek meaning openwork or latticework. A form of this technique was first used in the cage glass pieces made in the early fourth century a.d.; it was revived in this century by Frederick Carder at Steuben Glass. Only a few examples of this very’ fragile glass technique may be found in museums today.

Beginning w ith cased blanks Sautner uses fine sandblasting equipment to cut struts from the central crystal in order to support the cased layers. But sometimes even a few glass struts may detract from the design. By experimenting with design forms, however, Sautner has been able to create a full diatreta w ith no supporting struts whatsoever. The design supports itself by means of a few leaves, tw igs, or branches.

To further enhance his weights, Sautner uses another sandblasting technique that is his alone. 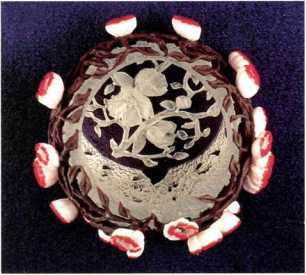 By working through small holes in the base, he can create three-dimensional flowers and leaves in the center of the crystal. This is called an insculpture.

Sautner has demonstrated his complete mastery of the diatreta and insculpture techniques by creating multicolored flowers and leaves from triple and quadruple encased paperweight forms. It has been said that Barry Sautner is doing what no artist in sixteen centuries has done. In 1976 James Shaw, a California ceramicist, was offered a place at Lundberg Studios to fire his kiln. Shaw quickly became fascinated by the work that was going on around him, and it was not long before he gave up clay and began working in glass.

At Lundberg Studios Shaw was introduced to the delicate grinding and polishing process that is so important to fine paperweights. After several years of refining his skills in this area, he began working in paperweight conservation and restoration. Since 1978 Shaw has worked on more than a thousand paperweights, sensitively repairing damage and restoring pieces to their original shapes and faceting patterns. He also works in collaboration with contemporary paperweight artists.

Shaw has recently started creating his own paperweights in exciting designs, shapes, and colors. His extensive sculpting, cutting, and faceting experience has greatly influenced the unique style of his work. In both his ceramics and his paperweight restoration work, Shaw found himself limited to creating and preserving the originalround shapes. His intricately faceted paperweights, which contrast dramatic angles and planes, break through this limitation and open up an entirely new world of design creativity. 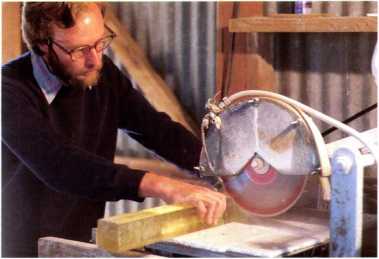 Shaw has also created a new paperweight-making technique in which already formed cold pieces of glass or other materials are laminated together rather than being fused and manipulated with heat. This precision lamination began while collaborating with paperweight artist Paul Stankard.

Shaw’s lamination process is extremely slow and demands a great deal of precision. A complicated design can take up to two months to complete. Surfaces must be ground, put together, then extensively reground, using precision optical machinery. The flat surfaces are bonded with a specially formulated clear epoxy made lor glass. Its brilliance and high index of refraction create a mirror surface for laminating.

One ot Shaw’s pieces demonstrates a rare blending of cold techniques. In a process not unlike the lampwork artist, Shaw makes an internal motif for a paperweight. His motif, however, is made of small squares of cold marble, formed by precision grinding and laminating techniques. Then, this inner motif is enclosed in a glass form to make a paperweight. All the work is done cold; but the end result clearly satisfies the requirement for intrinsic beauty and creativity.

Currently Shaw is creating both symmetrical

Shaw relates: “I like to think of my craft as a blending of science and art. I’ve read a lot and done a lot of research on the optics of glass. So instead ofstudying flowers and lampwork for paperweights, I’m studying the science of glass optics… I feel it’s a different approach to a traditional medium—a modern approach—my own approach.”

Shaw signs his weights in script on the side or bottom of the piece. 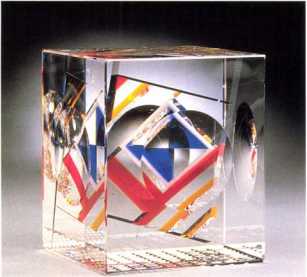 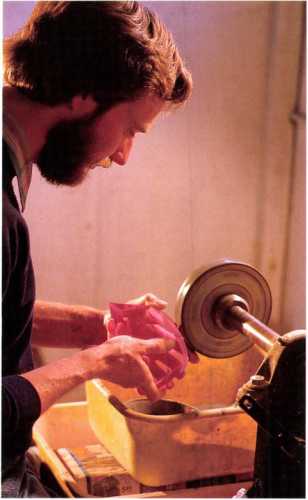 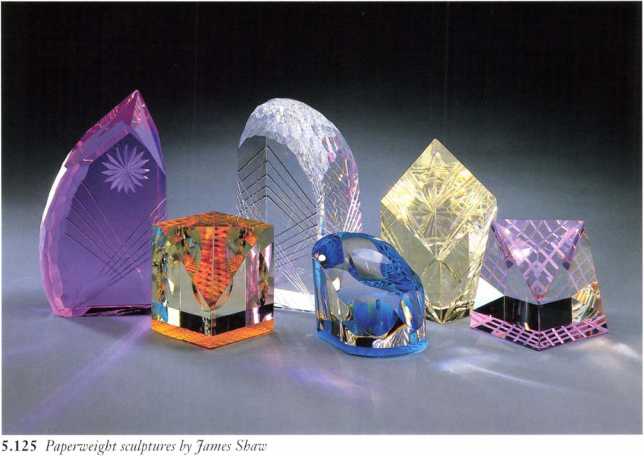