The process of producing sulphides, or encasing molded ceramic objects in crystal, was perfected and patented in England by Apsley Pellatt in 1819. Sulphides became a popular form of glass decoration in Europe during the first half of the nineteenth century. They were, not surprisingly, the earliest form of glass paperweight. Therefore, the classic period of sulphide paperweight production (1819-1865) begins more than twenty years before the classic period of millefiori and other types of glass paperweights (1840-1865). (See also Chapter Two, Sulphides.)

Sulphides are not only found in paperweights. They appear in a variety of other glass objects: decanters, tumblers, bottles, vases, cups, pitchers, jewelry’, buttons, door knobs, seals, candlesticks, religious objects, perfumes, and plaques. The cameos within these pieces frequently commemorate a historical event, or honor noted political, artistic, or religious figures. Many sulphides, how ever, are purely decorative in nature and depict animals or landscape scenes.

Sulphides are often difficult to identify because very few pieces were signed or dated. Some pieces, however, are marked. An impressed signature on the back of a sulphide usually indicates the factory’ or the person who made the original medal or sculpture from w hich the sulphide mold w’as made. Sometimes a name inscribed in cobalt oxide is found on the back of a piece or on the front of the 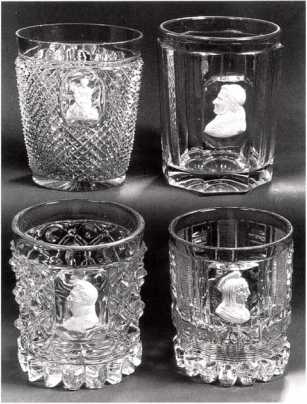 cameo at the bottom of the bust. Such an inscription usually identities the person represented in the sulphide.

One of the signatures most commonly found on sulphides is that of Desprez, an artist about whom unfortunately very little is known. In the book Sulphides: The Art of Cameo Incrustation, Paul Jokel- son relates the following information about this artist:

… It is certain that Desprez, Jr., and perhaps his father before him (during the reign of Napoleon 1) had not only mastered the technique of incrustation, but did so with a perfection that his contemporaries or his successors seldom achieved. There are five different signatures which were made on the back ot the sulphides with a dry stamp. Their chronological order is not known:

Other sculptors and medallists whose signatures are most commonly found on sulphides include Apsley Pellatt, Pierre Honore Boudon de Saint-Amans, anil Bertrand Andrieu. Paul Jokelson’s comprehensive book Sulphides: The Art of Cameo Incrustation contains extensive information about these and other sulphide artists.

Dated sulphides are rare. A lew of the pieces positively identified are sulphides made for the 1851 Great Exhibition in London.

The presence of millefiori canes in a sulphide paperweight can greatly help in attributing the piece to a particular factory. Also, some subjects are known to have been produced by certain glass houses. In one case, lor example, both a tumbler and an identifiable Saint Louis carpet ground paperweight feature the same painted bouquet design on an oval sulphide.

Perhaps the most prized Baccarat sulphides are a series of magnum weights with flat tops and diamond faceting. These pieces display a hunter and dog, Joan of .Arc, Queen Victoria, and the Madonna, and are set on transparent ruby, blue, or green grounds. Other reported Baccarat subjects include: 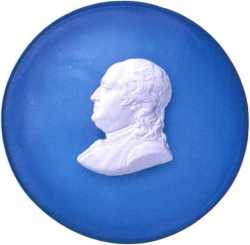 Clichy: Clichy sulphides are almost always set on opaque or translucent color grounds. In some examples Clichy roses and other millefiori canes surround the cameo. Reported Clichy subjects include:

Napoleon I (in profile and full view)

Saint Louis: Saint Louis created far few er sulphides than Baccarat or Clichy. In most of the pieces produced hy this factory a ring of millefiori canes encircles the sulphide. In some rare examples a spiral torsade surrounds the cameo and a laurel wreath is included beneath the subject. One unique Saint Louis design features a three-dimensional sulphide fish on a jasper ground. 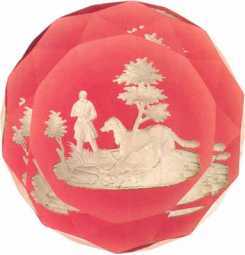