During the years 1905 to 1912, Millville and other glass factories in the area ofVineland, New Jersey, became famous for producing upright roses and other crimped flower paperweights. During this period crimped flower weights were made by several craftsmen including Emil Stenger, Marcus Kuntz, Ralph Barber, andjohn Rhulander. Unfor-

tunately it is difficult to attribute individual pieces to a particular craftsman.

Crimped flower weights were also made by Emil Larson, who was an active glassworker in the Vineland area until 1949. Larson knew many of the early Millville glassworkers and learned much of his glass making skills by observing their techniques. Crimped rose weights by Larson can sometimes be identified by the presence of a crossshaped pontil mark on the base of the weight.

The Chinese produced a number of weights like the Millville rose. In the Chinese pieces the glass has a yellowish tint, the flower petals are not very distinct, and the colors are not as vibrant as in the authentic Millville pieces. There are also modern Murano copies ofthe Millville rose. Murano flowers generally have a plastic look to them, and the green used in the design is also much yellower than in authentic Millville flowers.

There are four main types of bottle weights. The most common is the floral bottle weight, which features a silvery pot and one or more multi- petaled flowers made up of hundreds of closely spaced bubbles. Another type of bottle weight includes sulphide figures and plaques, of which many different varieties have been observed. Bubble bottle weights consist of a series of evenly spaced teardrop-shaped bubbles that fill the entire weight. These pieces are especially attractive when lighted from below. Finally, there are bottle weights with metallic foil designs. 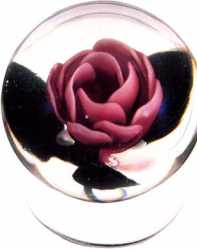 Most bottle weights are unsigned, but a number have been found with the words “J. Kilner, Maker, Wakefield” or “J. Kilner & Sons” impressed on the bottom. The age of these weights can be determined by the wording of the signature. The Birmingham establishment was called “J. Kilner” between 1829 and 1832. Its name changed to “J. Kilner and Sons” between 1832 and 1844. After this, the name was “Kilner Brothers.”Another signature sometimes found on bottle weights is “J. Tower, Maker, Wakefield.” 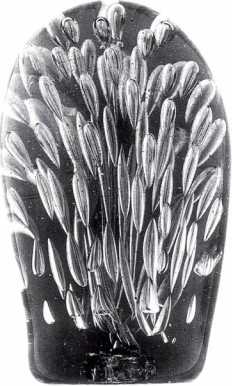 Frit weights, or motto weights as they are sometimes called, have designs made of powdered glass encased in crystal. A die is cut in a cast iron mold and the depression is filled with finely ground glass that fuses together and appears frosty when encased in molten crystal.

Many frit weights were made in the Millville area. Commemorative subjects, popular sayings, and mottos were common subjects. Some pieces contained names, such as a piece made by Michael Kane, a paperweight maker at Millville.

Although Chinese weights were not made during the classic period and in general are not considered quality’ works, they are sometimes mistaken for antique French and American weights. For this reason some history’ and clues to the identification of Chinese weights are included in this section.

During the 1930s, as paperweights from the classic period were becoming more difficult and expensive to collect, American importers sent antique French and American paperweights to China to be copied. Over the next several years glass factories in Shantung province produced thousands of paperweights based on classic designs. These copies were then imported to the United States.

Although the Chinese were skilled in glassblow-maming and lampworking techniques, they were unfamiliar with millefiori production. For this reason the canes present in early Chinese weights are usually simplistic in design and often poorly constructed. The bright reds, yellows, oranges, and greens used in the millefiori make these weights fairly easy to identify. 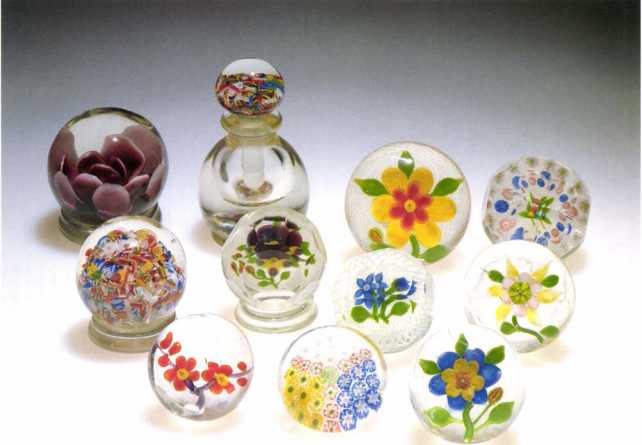 The glass in almost all early Chinese weights is relatively light in mass and has a yellowish cast to it. Bubbles, striations, and other impurities are common.

Some of the best early Chinese weights were those copied directly from W estern examples. Some were even finished with concave bases. Copies of American designs often had the quatrefoil faceting typical ot the New England Class Company.

A partial list of designs copied by the Chinese

in their early weights is given here:

Saint Louis upright bouquet—on a latticinio ground. Attached to the ground and extending across the dome is a spiral filigree handle holding a basket for the flowers.

In addition to these designs, many concentric and scrambled millefiori weights were made. The Chinese also produced a few original designs such as two orange blossoms on a branch, and a painted 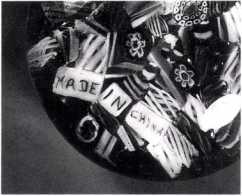 weight showing a woman in a pastoral setting. Other paperweight-related objects produced by the Chinese include inkwells and perfume bottles, with scrambled or concentric millefiori in the stoppers and bases similar to English pieces; millefiori chopstick holders; glass cubes and other geometric shapes containingglass or sulphide birds, monkeys, or other representational elements.

The early Chinese weights were marked for import in several ways: “China” was scratched on the bases of many pieces; paper labels with “Made in China” printed in black or red were attached to some weights; and in a number of examples small rectangular white plaques, which read “Made in China,” were embedded in the design. Recently, China has again started to export paperweights. The glass in these contemporary pieces is much improved and many pieces contain new and original designs. Frequently the predominant colors in these weights are Chinese red, bright yellow, orange, and green.

Some examples of new and original Chinese designs include a variety’ of large doorstop weights with realistic green lilies and frogs; a number of floral designs with butterflies, dragonflies, and other insects; and one weight with a red Christmas poinsettia and four canes bearing the Chinese ideograms for “Peace on Earth.”

Another innovative Chinese design presents a number of featherlike millefiori canes that fill the weight in a close packed arrangement to represent the tail of a peacock. In these pieces, the head of the bird is pressed into the side of the weight so that

the bird appears to be strutting vertically.

Because the glass industry in China is no longer as heavily subsidized as it once was, the price of Chinese paperweights is rising. However, when compared with the current costs of other weights, the prices are still relatively low. Today many discriminating collectors are finding certain Chinese paperweights interesting and unusual additions to their collections. These pieces also offer an inexpensive alternative for those who love paperweights but cannot afford to actively collect high-quality’ pieces. They can also provide a colorful and interesting beginning for a child’s collection.