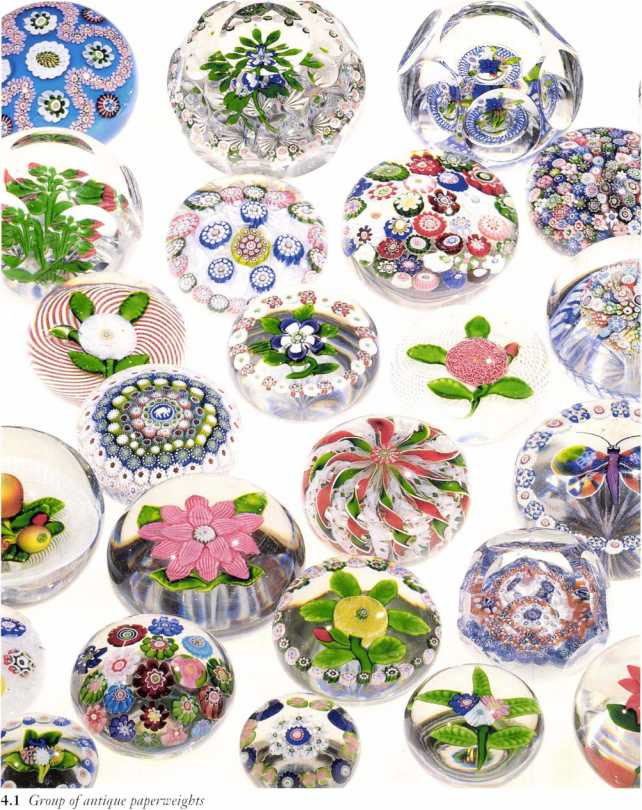 There is tremendous variation in \n- tique glass paperweights. When considering value and collectibility, much depends on design, workmanship, condition, maker, and rarity. Few antique weights contain signature and date canes to aid in identification and evaluation; yet, some paperweights contain date or signature canes with false information. In addition, there are many cheaply made paperweights of poor quality that are passed off as collectible antiques. For all these reasons, it is critical that collectors understand and recognize the subtle and minute details distinguishing one maker’s weights from another, older pieces from modern ones, and quality weights from poorly made ones.

This chapter presents a basic introduction to the main characteristics used in identify ing glass paperweights made before 1900. It also includes information about modern weights with spurious date and/or signature canes, weights that are sometimes mistaken for antiques, such as modern Italian orMurano paperweights, and Chinese weights made during and after the 1930s.

this hook, such as a “snowstorm” novelty weight or an advertising weight.

For easy reference this chapter is divided into the following broad areas:

The look and feel of the glass used in paperweights varies from maker to maker depending upon the formulas and raw materials used. The heaviness of

the piece; imperfections present in the dome; and the color, clarity, and brilliance of the crystal are all important points to consider.

Weight: The paperweights of the classic period (1840-1860) were for the most part made from glass with a high lead content—often as high as 32%. These antique pieces are heavier in the hand than most contemporary paperweights. For example modern Murano weights, sometimes mistaken for antiques, are usually made of very lightweight glass.

Still, it cannot be said that all lighter paperweights are modern, and that all heavier paperweights are antiques. Some antique Clichy weights feel lighter; weights made by Bacchus, Val St. Lambert, and Gillinder, as well as those made in Bohemia and Venice, are usually lighter than most antique pieces. It is also interesting to note that the glass used today by Baccarat and Saint Louis, and that used by Whitefriars in its paperweights up to 1981, contains as much lead as many antique weights.

Imperfections: No factory’s paperweights were consistently free from imperfections. Sometimes bubbles in the glass were created when the deco-

rative elements of a paperweight were picked up by the gather of molten glass that became the dome of the weight. A sugary appearance in the glass, known as striations or striae, may have occurred because of an uneven chemical composition caused by poor mixing within a batch. Also chips from the clay melting pot or other extraneous matter commonly found floating in the molten glass were sometimes encased in the finished weight.

Certain factories showed consistent imperfections in their weights. Sandwich weights, for example, often had a “cowlick” or swirl-shaped formation at the apex of the dome where the glass was imperfectly blocked. In American weights there were often small bubbles or “dewdrops” on the surface of lampwork flowers.

Color: The color, clarity, and brilliance of the glass are extremely important when judging the quality of a paperweight. A yellowish cast to the glass is characteristic of Chinese weights made during the 1930s and 1940s. The glass in some classic period Bohemian weights is slightly yellow in color as well.

During the classic period the French glass factories produced paperweights in a range of sizes. English weights were mostly magnum size.

The profile, the way a paperweight is shaped, can sometimes help in determining where it was made. Since there was often a variety of profiles within the product line of a single factory, this is not always a reliable method of identification. An even greater problem is that the shape of many antique weights has been altered dramatically by poor polishing. (Good restoration maintains the original shape of the dome.) 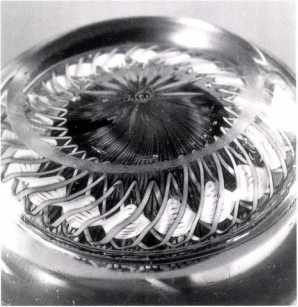 4.3 Frosted ring on base

Weights made by the Sandwich factory often have very low, squat domes. This flat profile can sometimes help to distinguish Sandwich weights from the higher-domed pieces made by the Xew England Glass Company.

\\ ear: On the bottom of concave-base antique weights there is often a frosted ring made up of inany evenly distributed tiny scratches running in all directions. Not all antique weights show scratches on the base because many pieces have been restored and polished. Collectors should beware of long, sparse scratches that only run in a few directions; these might be the result of an attempt to instantly age a piece.

Pontil scar: On most quality weights the pontil scar, or mark left when the weight was broken off the pontil rod during fabrication, is usually ground

In general, the presence of a pontil scar indicates a weight of inferior quality, hut this is not always the case. Some English and American weights of value have obvious pontil scars. It a pontil-marked weight features a tulip or crimp rose enclosed in clear glass it may have been made at Millville. It the piece has a distinct ridge around the base where the dome and bottom are joined it may be an English piece. The vast majority of British green bottle weights have pontil marks and are considered collectible. 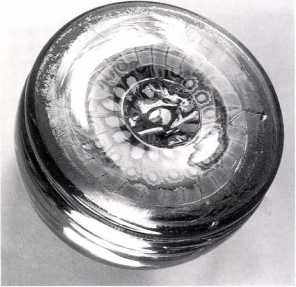 Types of bases: Most antique French and American paperweights have polished concave bases. On these weights the pontil mark was removed by grinding it until smooth with a small convex wheel. The base was then polished to a high sheen. One- interesting observation is that the indentation on the base of Sandwich w eights is much shallower than it is on New England Glass Company weights.

A translucent white or frosted base was created by grinding the bottom flat without final polishing. Weights finished in this manner are usually of 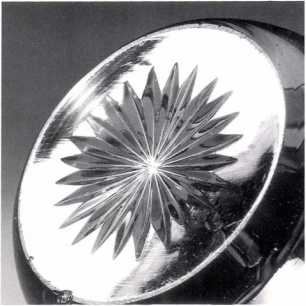 Weights with flat and polished bases are usually of more recent origin, and most are not fine collectors’ pieces. Contemporary paperweight artists tend to protect the bases of their weights by making them concave. 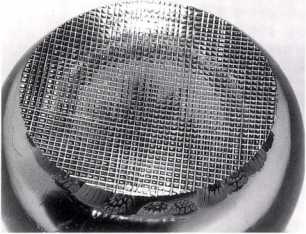 Many antique weights have decorated or embellished concave bases. A common decoration was a small many-pointed star. Usually less than an inch in diameter, it was cut into the center of the base. Another star used in antique weights and still in use today was actually cut into the edges of the base. The bases of Clichy double overlays were sometimes cut flat and embellished with a star or with lines crossing at right angles in a grid pattern. This was unique to Clichy until Murano started producing crude copies of the same design.

The “ground” or “cushion” of a paperweight is the background on which the design or motif of the weight rests. Here is a list of the grounds most commonly found in antique weights.

Clear: A ground of clear glass. Most paperweights are set on clear grounds.

Color: A background of translucent, transparent, or opaque colored glass.

Flash: A thin coating of transparent glass applied to the weight’s base.

Jasper: A mottled background composed of finely ground glass in two or more colors. Saint Louis weights of this type often have a double layer of jasper, the second layer of which can be seen through the base of the piece. 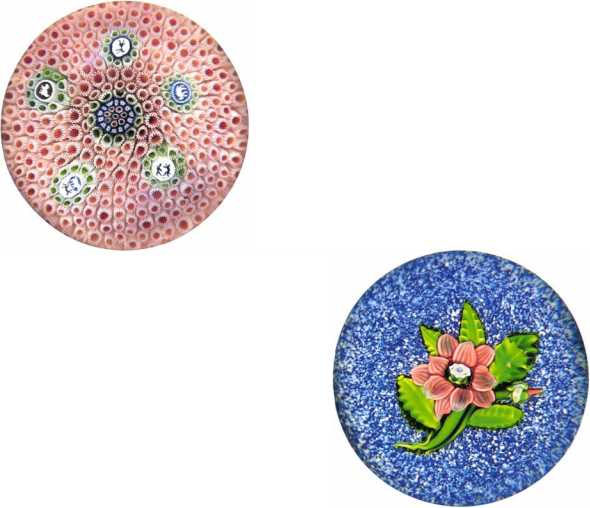 Latticinio: Sw iris of criss-crossing white or opatpie glass strands that form a latticelike cushion. American latticinio (NIX iC or Sandwich) was invariably made of 32 strands, while Saint Louis and Clichv used 36, or, occasionally, 40 in the construction of their latticinio.

Mottled: A coarse jasper ground made up of melted chips of colored glass. Mottled grounds are not usually found in classic period weights.

filigree). A ground composed of short lengths of filigree tube, usually white, ((dear glass rods surrounded by threads are twisted to create the appearance of threads spiraling around a hollow core.) A layer of filigree tubes set in a parallel arrangement was often set on the bottom of Clichy muslin grounds.

grounds but no animals, sometimes called “mountains of the moon.”

Certain grounds were produced by some factories and not others. The above chart indicates the typical grounds in paperweights produced by various makers. Modern Murano and Chinese paperweights are included to help in distinguishing these pieces from classic period paperweights.

All the major glass factories of the classic period produced faceted weights. In faceted paperweights concave or flat windows (also called printies or punties) are ground into the dome of the weight. Such indentations in the glass can dramatically change the appearance of the internal motif of the piece because of the change in magnification. In the case of overlay paperweights, where the clear glass is coated with one or more layers of opaque glass, facets are necessary in order to view the motif within the weight.

Some faceting patterns are characteristic of particular factories. I lowever, many antique pieces

have been ground, polished, and refaceted with little or no attention paid to the original faceting design. It is, therefore, dangerous to rely solely on a faceting pattern in identifying a piece.

Baccarat: The most common Baccarat faceting pattern features a concave window on top with six high-set windows around the sides of the piece. This same design with the addition of a number of small oval windows around the bottom edge of the piece was often used on Baccarat overlay weights. A faceting pattern typically found on large Baccarat sulphides is a large top window with many rows of diamond-shaped facets covering the sides of the piece. 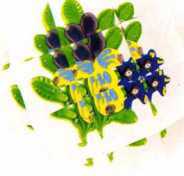 Saint Louis: One typical Saint Louis pattern has five or six large side printies and a top window surrounded by a circle of small oval w indows. All- over faceting was a common Saint Louis cutting pattern, especially on upright bouquet weights. In another design small hexagonal printies, sometimes called honeycomb faceting, covered the sides of the weight and a large window was cut into the top. A pattern that Saint Louis typically used for its clematis-type flower weights has six side windows with no top facet. Saint Louis also made weights with side windows and rows of small square printies covering the top of the w eight.

Gillindcr: Many (iillinder weights arc faceted with a top printv and several deep, oval side windows that extend dow n to the base of the weight.

New England Glass Company: \ faceting design peculiar to NF.GC 1 features four small printies forming a quatrefoil cut into the top of the weight. This pattern is accompanied by one or two row s of oval facets, often with three little cuts called crow’s- feet cutting in between. Another NF.GC faceting arrangement is a large concave top window with many oval windows cut into the rest of the weight.

Overlays are paperweights that have been coated with one (single overlay), tw o (double overlay), or three (triple overlay) layers of opaque glass. Window’s are ground through these layers of color so that the inner motif can be seen. In “flash overlays” the colored glass coating is transparent rather than opaque. In “encased overlays” the weight is covered w ith an additional layer of clear glass after being overlaid and faceted. Overlays as a group make up only a small proportion of paperweights, and encased overlays are quite rare.

Baccarat: Many of Baccarat’s double overlays were done in turquoise over white on interlaced garland

Clichy: Clichy single overlays were rarely made. Double overlays with an inner layer of white and an outer layer of red, blue, or green were more frequently produced. Many of these pieces included millefiori canes in a mushroom-shaped bundle.