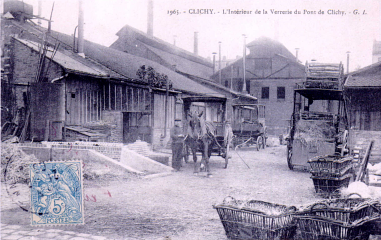 The Verrerie de Clichy at Clichy-la-Garenne, France, operated between 1837 and 1885, when it merged with the Cristallerie de Sevre. No trace of the Clichy factory or its archives remain. In the early years, the Clichy company produced inexpensive glass for export. They became known when they exhibited their colored and overlaid glass in 1844 at the French Exposition of Industrial Products. Clichy was known for its paperweights from 1846 to 1857 under managers Rouyer and Maes. Their reputation for color and for paperweights and other smaller decorative objects allowed them to prosper throughout the Depression of 1848. At the 1849 Exposition, they showed their non-leaded glass that was lighter and clearer than other companies' glass. The high point of the company's success was marked at the London Exposition of 1851, where they showed glass in many shades of blue, red, gold, yellow, and black, as well as their filigree and millefiori. English manufacturers hired some Clichy workers to show them how to create similar lines of glassware. After Maes' death, the company began to decline. In 1885, a glass manufacturer from Sevres bought it and merged it with his company, which made glassware items totally unrelated to that previously made at Clichy. The Clichy Rose Clichy paperweights featured a rose-like cane of unknown origin that is called a Clichy-rose. It consists of a close overlapping arrangement of flattened hollow canes around a center millefiori cane. White, yellow, and pink are the colors most found in Clichy roses. Sometimes the roses have green sepals around them. They are found singly and combined in clusters and canes with other designs.