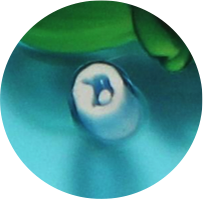 Bobbi is the former wife of Bob Banford and made a number of good lampwork weights from 1985 to 1994. She made single flowers and bouquets stylized in the manner of the antique French weights. In addition to weights, she also made a number of pendants with lampwork designs. Her work is signed with a turquoise script “B” in a white cane with turquoise rim.